Back in the Saddle Again

Hi sisters,
We have been in the states for a little over a week now and I'm finally feeling back on track with work, settling in to our new apartment, and ready to jump on the ole' blogwagon again. I think one of the hardest things about coming home is attempting to describe our trip and then trying to explain what it feels like to be home. You know me, I am all about storytelling (ie I have a condition called "long windedness") and am equally ALL ABOUT sharing feelings (ie my job). But, I can't really seem to do either when it comes to this trip. Two months away, 8 countries, 11 destinations, and a kabillion stories. People keep asking us what our favorite country was, or our favorite city, or what our craziest story is and my response is usually some mumbled version of "It was all pretty amazing, but our favorite city, hmmmm, I'll have to think about that....".

The other night a coworker asked for some of my top moments. I loved that question and was so thankful she asked. I think moments are much easier to describe because that's what the trip seemed to be made out of. Not countries, cities, planes, trains, or hostels; but moments.

So here is my attempt to describe a few of my favorite moments from our trip. 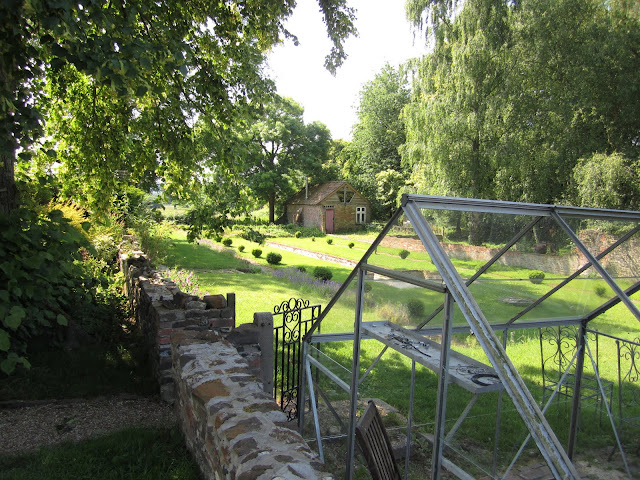 One of my tasks during during our time at L'abri was to cut flowers from the gardens to put on tables in the manor house. Me, a pair of scissors, an old pitcher, and a giant english garden all to myself. Heaven. 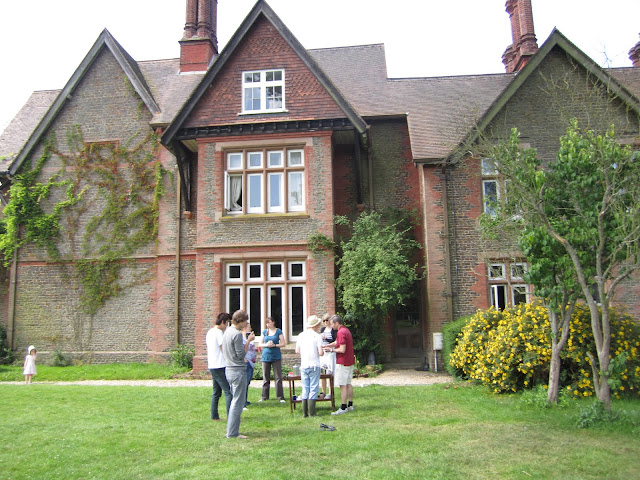 Twice a day we had tea time at L'Abri. We took a half an hour out of our studying to pour ourselves a cup of tea, sit outside, and make each other laugh. 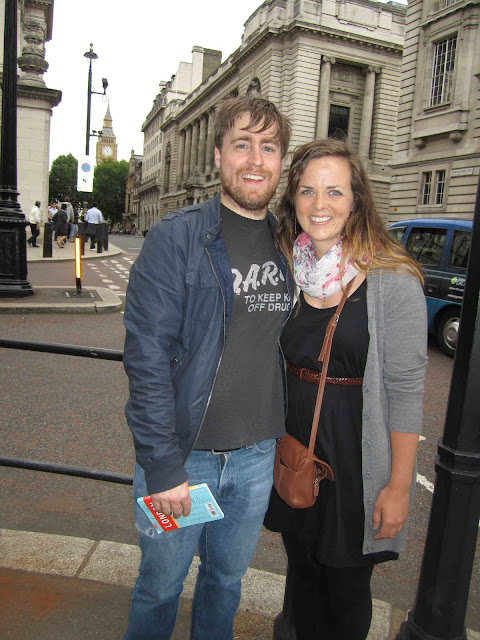 We asked someone to take this picture of us at the beginning of our crazy long touristing day in London. Note the map in our hand, Big Ben in the background, and the smiles on our faces because we hadn't walked a million miles and bumped into a bazillion other tourists with maps and a tortoise like walking ability. 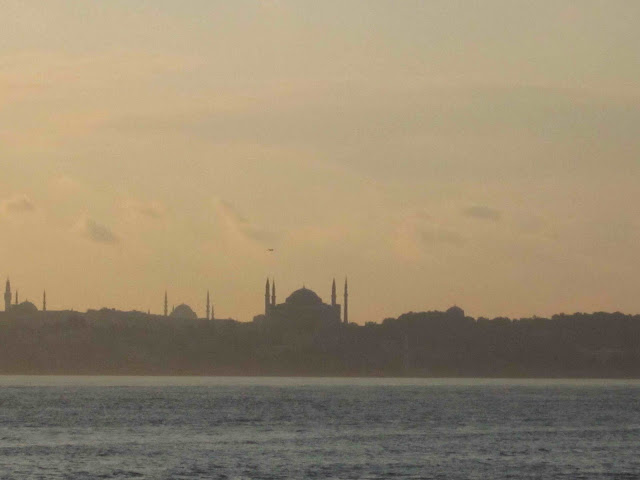 We snapped this picture on a ferry on our way back from a day trip Princes Islands. Just as we were pulling into the dock the sun began to set, we stood next to each after the photo and tried to wrap our brains around the fact that we were in Turkey. 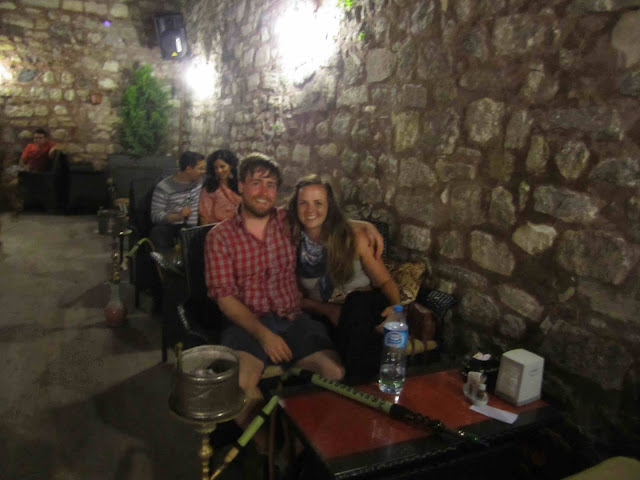 This photo is far from good (our point and shoot is the worst at night), but I love it. This was our last night in Istanbul and we found a little hookah bar in a back alleyway that had an outdoor patio facing the Blue Mosque. There was barely anyone there, a band playing traditional Turkish music, and at one point the staff at the place broke out into this beautiful Turkish dance (think a slower version of Greek dancing). 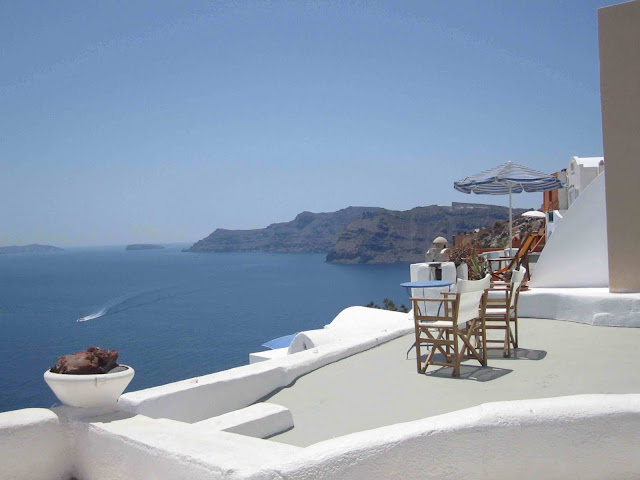 This was the roof of our cave house and our "dining room". We sat up here every night for hours eating, drinking, scheming for our next big adventure, and making each other laugh. 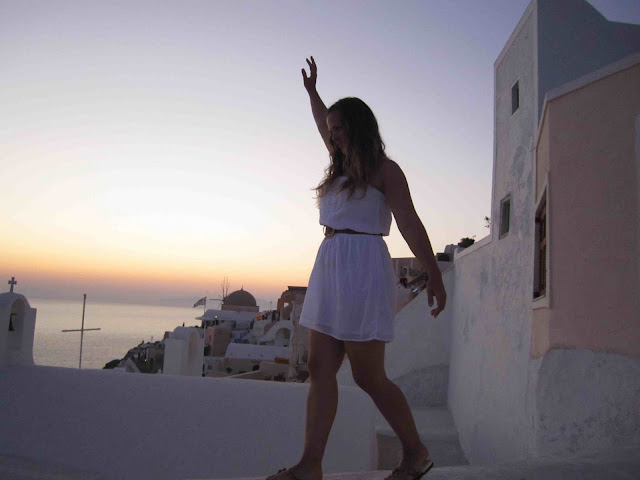 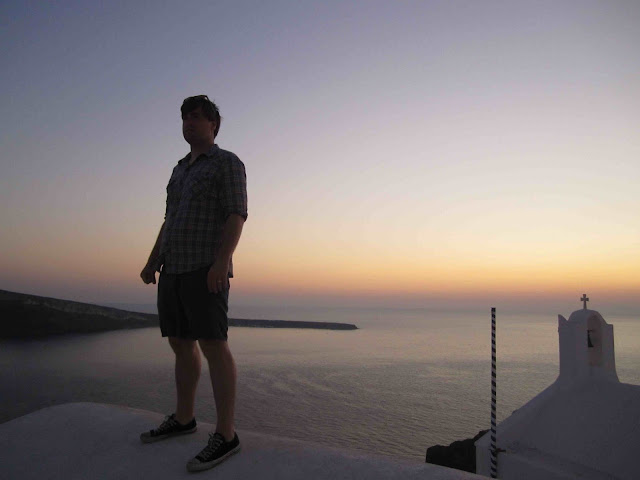 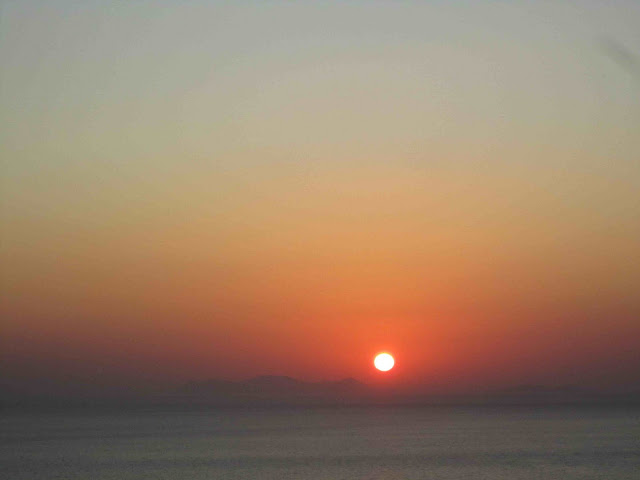 Oia is known for their sunsets and the village gets really crowded around dusk as people come in from other parts of the island to watch. This particular night we climbed on top of a roof to get a good view and stay away from the crowds. 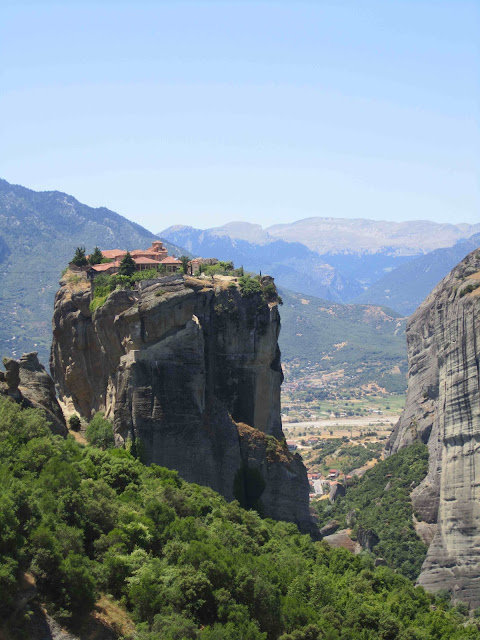 This is what we came to see, these insanely beautiful monasteries built into the sides of cliffs. I have no idea how to capture these things on film. 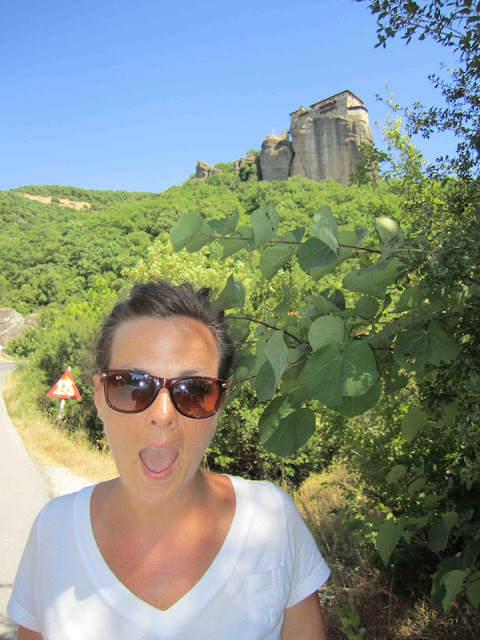 I'm not exactly sure what I'm saying here, but Nathan grabbed this shot as I was talking smack about the people that drive the majority of the way up the cliff to see the monasteries, verse hiking it like Nathan and I did. I was dying of heat and walking along the side of the road because I didn't want to be hit in the face with anymore branches in the wooded area. Clearly I was a little bitter.

Venice, Italy
Dancing in the street 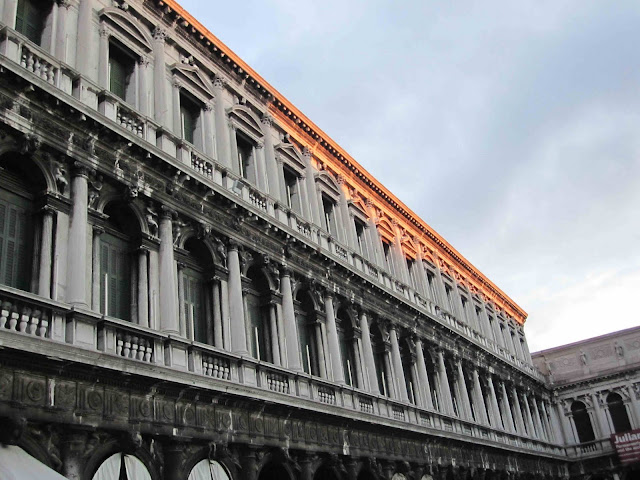 We were only in Venice for a day and night on our way to Austria. We were both very travel-cranky in the morning, but by afternoon and night we were fully basking in the decadence of Venice. Right after I snapped this shot of the sun going down in San Marco Square Nathan made me put down the camera and dance with him as the street musicians played classical music. I was insanely embarrassed by this and totally in love with him at the same time. 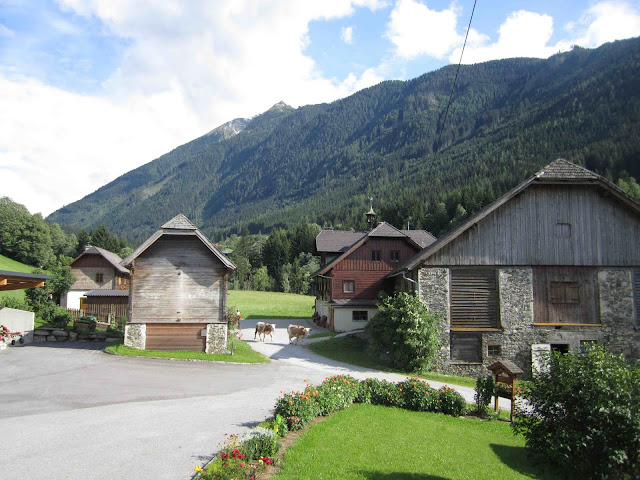 We stayed in a pension on farm in a small village at the foothills of the Austrian Alps and every morning I would pull back the shades and see huge mountains in front of me and goats and cows to my right. 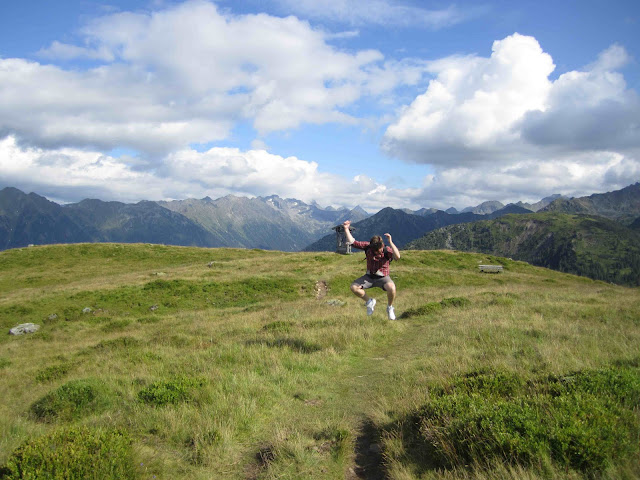 This is Nathan jumping for joy at the top of one of the mountains we hiked. It had rained for two days straight before we left, so when it was sunny on our last day there we decided to do two hikes in one day. This was 7 hours into hiking later. My calves hurt just typing this. 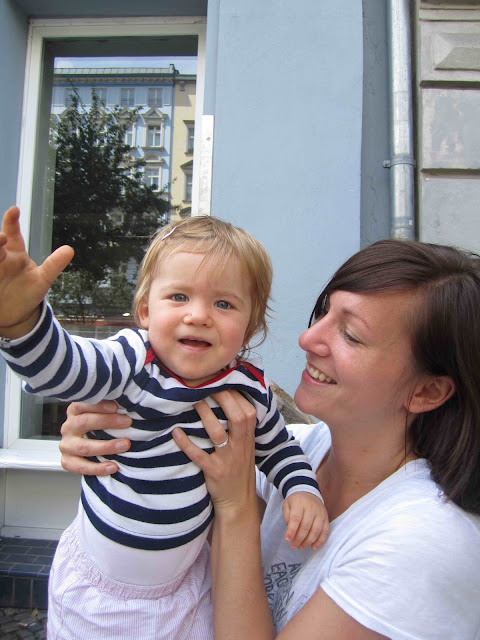 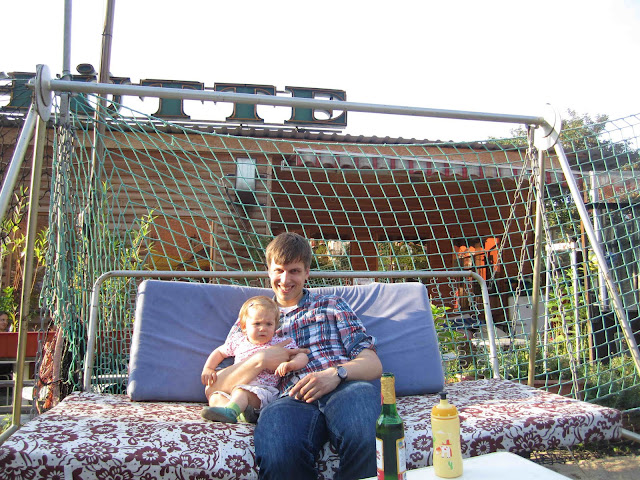 One amazing part of Berlin was getting to stay with our friends there. We met Johannes and Eliza when they were traveling through the US a year and a half ago. Nathan's friend emailed us and asked if they could stay with us in NYC, it was there last stop on their two month greyhound bus tour of America (you read that right - GREYHOUND) before they flew back to Germany. In the last year and a half they've gotten jobs, moved into an amazing neighborhood in Berlin, and added this beautiful girl, Noa, to their family. Nathan fell head over heels for this little 1 year old, even making us come back from our days out before she went to bed so we could say goodnight to her :) 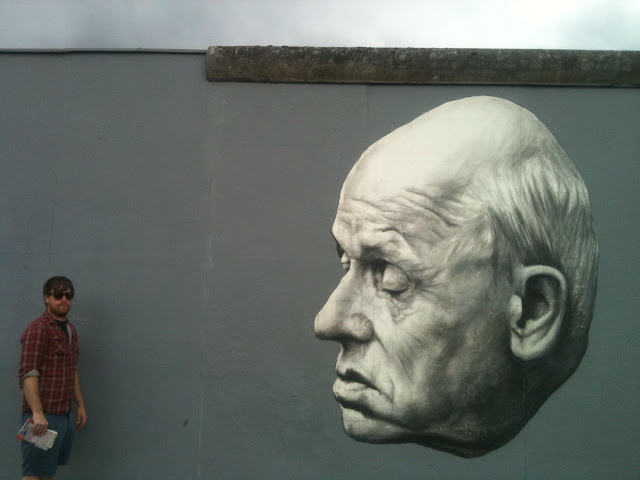 Our friends lived right near Wall Park in Berlin on the East Side, so every day we walked past the wall. One day we headed to the Wall Gallery and took the afternoon to walk alongside the wall, take in the art that was commissioned by the city after the wall went down, and read as much as we could about Berlin's history. 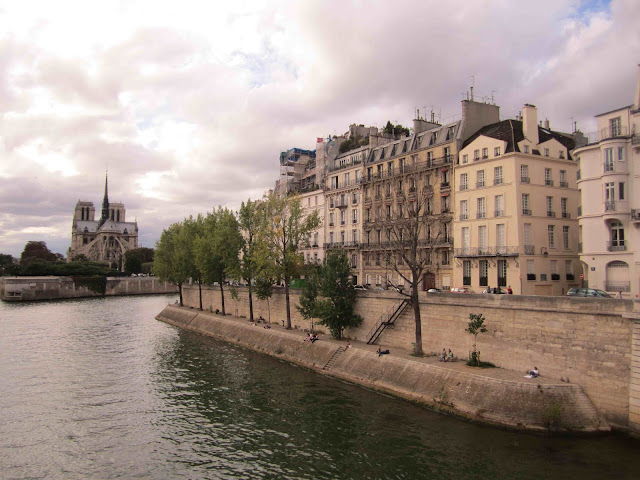 We came to Paris to visit a dear friend who had just moved there, and who is probably more in love with the city of Paris then anyone I've ever met. One of her things to do is walk along the Seine. So we took her advice and spent an afternoon picnicking in the spot above. After our baguette sandwiches, Nathan laid in my lap, and we sat there for an hour just looking out onto the river and not saying anything. We knew the end of our trip was now more near than far, so I think we were just trying to take it in. 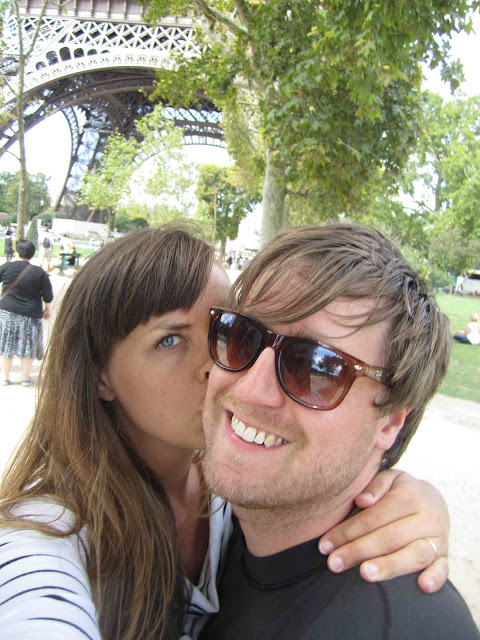 You can't go to France without taking a picture in front of the Eiffel Tower right? Right. On our last day we scurried to the Eiffel Tower, it was REALLY hot out, we were both overdressed for the weather (weather.com is a liar), and it was SO crowded. We swam through the people, dripping in sweat, parked ourselves in front of the tower, and tried to find some people to take our picture. We did. And turns out, we both looked hot and sweaty. I was pretty bummed and politely asked another group of people to take a picture for us. Still hot and sweaty looking. I resigned to the fact that I wouldn't have a magazine ready picture of Nathan and I looking frenchy with the tower romantically in the background. Nathan could tell I was bummed, so as we were walking away he pulled me close to him, kissed me, and reminded me that even if we didn't have an "Eiffel Tower" picture, we will always have Paris. I smiled, kissed him on the cheek, and snapped this photo anyway :)  We're still sweaty and hot, but I love it. 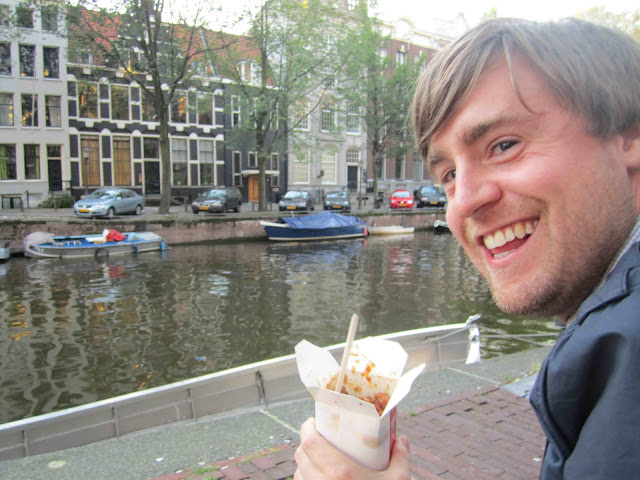 We celebrated 3 years of marriage while we were in Amsterdam, and when Nathan asked where I wanted to eat, I told him I wanted to eat take out near one of the canals. As we bought our food and it totaled to a whopping 12 euro, Nathan laughed and told me that when he was getting ready to propose to me 3 1/2 years ago he told one of my guy friends from high school that he was nervous that he wouldn't give me a good enough "proposal story", that it wouldn't be enough of a surprise or lavish enough. To which my friend replied "you could propose to Kathleen in a McDonalds and she'd be happy". I'm going to take that as a compliment, as opposed to a comment on my less than refined culinary tastes :) 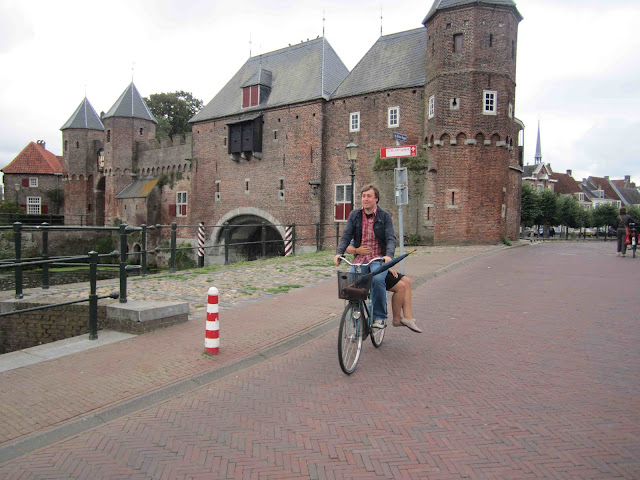 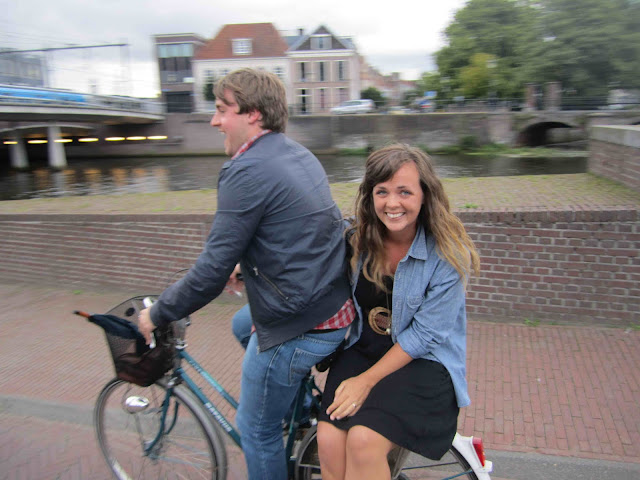 EVERYONE rides bikes in the Netherlands and I love it. People also ride "double dutch", which means that someone rides side saddle style on the back rack of the bike. This is Nathan and I "double dutching" in a small town in the Netherlands where one of Nathan's oldest friend lives. He snapped these shots of us as were riding around his city center. I wish we had that bike back in New York...
*and I also wish my eyes didn't look crazy town in this shot, but I love this moment so much I don't care

That's all I've got for now, but I can't wait to make an album with these and the rest of our favorite pictures with Pinhole Press!

P.S. A moment that is definitely NOT in our top 10 .... the last hour of our 30 hour ferry ride from Greece to Italy. Never again people. NEVER AGAIN.

Posted by Dawson Sisters at 6:11 PM

Email ThisBlogThis!Share to TwitterShare to FacebookShare to Pinterest
Labels: travel

We are three sisters living in three separate cities; Megan in San Francisco, Christina in Chicago, and Kathleen in New York. When we were younger we thought that by the time we were close to 30, we'd have it all figured out - that we would be all grown up. Turns out we are far from figuring anything out AND far from each other! We hope this blog can keep us connected as we still try to understand what it means to be grown up.